A Project for Better Journalism chapter
The Kerronicle
Sports 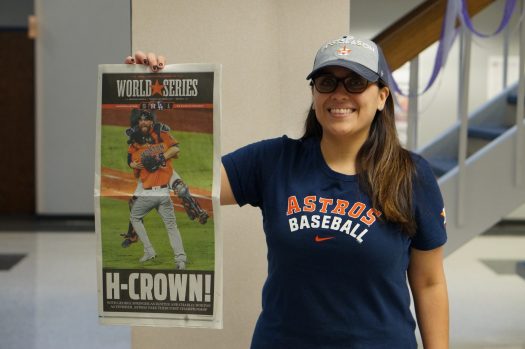 The Houston Astros made baseball history November 1 by winning the World Series. This was the first appearance in the championship for the team, and its first win.

For some at Kerr, the win was entirely expected.

“They had a lot of support from their fans,” Priya Sinha (9) said, adding that she believe that fan support helped the team win.

Coach Mary Pat Bailey, whose husband works for the Astros organization, said they are a talented and motivated team.

“I expected them to win,” she said. “They were fired up.”

“It was two to nothing for a long time,” he said.

Some fans felt that it was only right for the Astros to win the World Series because of all Houston has been through in the past few months following Hurricane Harvey.

Alas said she was confident from the start the Astros would win, “but then throughout, I was getting a little nervous, but then when they were leading total score game wins, I was confident they were going to win.”

There were many different ways that fans found out the results for the game. Senior Genesis Gobellan didn’t watch it, but knew right away when the Astros had won it all.

“The way I found out is a funny story,” Gobellan said. “I was working in my room when my mom started cheering, yelling and running in circles telling me that the Astros had won. We started celebrating and jumping together saying, “Houston for the win!”

In celebration of the Astros winning the World Series, the city has decided to throw a parade in their honor, taking place in the downtown metropolitan area at 2 p.m.