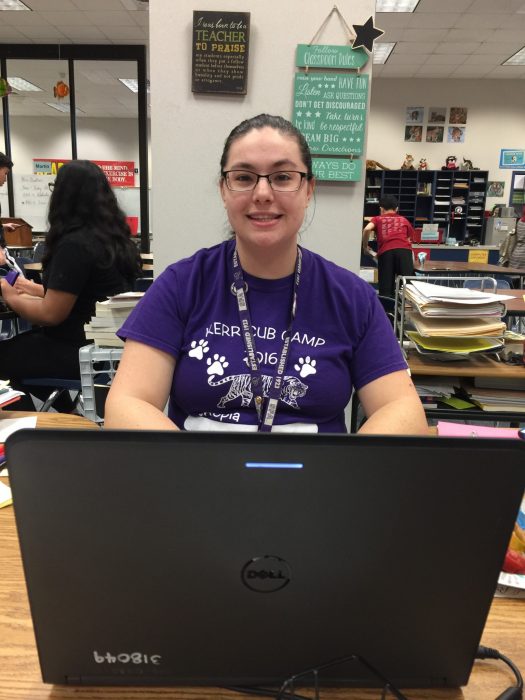 Question: What is one of your hidden talents?

Answer: “One thing that I like to do in my downtime is to create board games. I am in a board game group and we all work together, create games and play them…We go to a lot of board game conventions and stuff, so we are always getting ideas of how to layout things and play together. Sometimes it’s just easier to just create the game ourselves. On the weekends, i go to board game conventions and I demonstrate the game and I play it for other people, so they can learn about the game and they can figure out whether or not they want to buy it”.

Q: What are some pets you’ve had or would like to own?

A: “I have a pet right now. His name is Percy. He is so cute. He is a chihuahua mixed with Italian greyhound. He has a round chihuahua body and like really deer like legs, really long and lengthy. He is actually called a deer-huahua…I love energetic dogs.”

Q: What is your dream vacation?

A: “I want to go to Aruba. It is on the other side of the Bahamas, but it’s supposed to have really clear open oceans. Its supposed to be one of the ones that has not been touched.It’s a really small island. I wanted to see if I could retire someday, but I was watching a show and it said that you could buy a condo at the beach, but it said it can be $500,000.”

Q. If you won the lottery and decided to give up teaching, what would you do instead?

A: “Jeez, that’s a hard question. I would probably start a rescue for dogs. My friend has one. She partners with a husky foundation and up in Conroe there’s a lot of people that have huskies and what they don’t realize is they let them out during the day and a lot of people don’t have fences and stuff but huskies are migratory dogs, so you let them out and they might not come back to you. I would like to have a foundation where it educates people based of the breed of the dog because I feel like there are many people out there that might not be as responsible dog owners.”

Q: How does technology make teaching more simple or difficult?

A: “I think technology makes education a little more simpler because anything that I want my kids to learn its right there at their fingertips and it’s not like they have to listen to me and remember all the time all the resources that they need. I can give [the resources] on schoology and they can look at it anytime they want to. I think repetition is a big factor when it comes to education and its really easy to have technology there because it helps you with that repetition and that practice.”

Q: What’s the best/worst thing about being a teacher?

A: “The best thing about being a teacher is the relationships you get with your kids and just being able to like see the whole learning process. The worst part would be keeping up with grades and being super organized. I was never really super organized until I became a teacher and I was like ‘oh okay’. I have to make sure I don’t lose anything.”

Q: How do you remember all of your students’ names?

A: “I have seating charts. Well I don’t force kids to sit in places, but I secretly create like little a little seating chart of where everyone is.  Calling students up one by one helps to like whenever they are processing stuff. That way you get to learn more about the kids, for the first couple of weeks I hope they all sit in the same place.”

Q: What one piece of advice would you give to your students?

A: “Be mindful of other people. I think that’s a big deal. Especially like Kerr because it’s kind of competitive…and I try to do group work, working together, talking together, but I think this school has been designed particularly where students you know start to learn on their own. Its me I have to do it all by myself , if I don’t do it all by myself then there’s going to be a problem. You have the resources and you should be able to have a small group of people that you can rely on. I feel like that is something we really have to focus at this school is being mindful of other people and being mindful of what you need.”

Q: What is your favorite food?

A:“Its apples and and almond butter. It’s my favorite thing…almond butter is really good because it gets really creamy.”

Q: As a child what was your dream career?

A: “I thought I was going to be an event planner, but i’m not crazy organized, like I said so that wouldn’t work out well. The anxiety of being in charge of someone’s most important day is a problem with something I can’t handle. After that, I wanted to be a travel agent because I always thought that travel agents got to travel for free and that you would be able to travel the world and do what you want, but really I was looking into being a travel agent and when they send you to those places your working, so your not really having fun or relaxing.