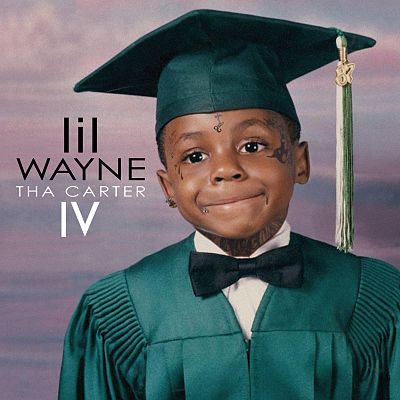 August brought the anticipated release of Lil Wayne’s ninth album, Tha Carter IV.  Three years had passed since the last installment of Tha Carter series; Wayne spent the time working on his negatively reviewed album, Rebirth, and his collaborative album, We Are Young Money, building up hype for Tha Carter IV. With the latest release, Lil Wayne continues to bring his signature punchlines and trunk-bumping beats.

Wayne begins the album by straight rapping on a track without a chorus, giving  his fans a clear message: Weezy’s back. Delivering lines such as “Hear no evil see no evil/Helen Keller” and “Boy I’m going in/Like my water broke,”  the track “Intro” sets up high expectations for the rest of Tha Carter IV.

Wayne collaborated with many artists for this album, such as Rick Ross, Tech N9ne, T-Pain, Corey Gunz, Andre 3000, Jadakiss, Busta Rhymes, Drake (of course!), and surprisingly, soul singer John Legend. I have to admit, I couldn’t imagine Weezy making a song with anyone else other than another rapper.

The “Intro” is followed by “Blunt Blowin” and “Megaman.” These two tracks are personal favorites of mine. Despite unneccessary pauses, “Megaman” has an infectious, uptempo beat andcontinues the  expectations set by the previous track. But “Blunt Blown'” made me realize Wayne’s creativity and the effort that goes into his verses with lines such as “I live it up like these are my last days/If times is money, I’m an hour past paid.”

The third single. “How to Love,” proves to be one of the most unique tracks on the album, despite the many jokes made comparing Wayne’s personal life to the message of the song. The song reveals a different side of Wayne that many listeners were oblivious to, showing sympathy to women who aren’t able to open up and fully experience true love. The stripped-down-to-the-basics yet original beat proves to be a tearjerker.

Another deep and insightful track on the album, “Nightmares of the Bottom” has Wayne reflecting on the negative effects of  his current success. Lyrics like: “Sleepin’ at the top, nightmares of the bottom” set a dark, gloomy scene. The title of the song doesn’t portray the immensity of its darkness.

As for the collaborative tracks, Drake dropped a verse along with Jadakiss on the track “It’s Good.” The song is allegedly a diss to Jay-Z, but despite the rumor, the track shows the strength of each rapper’s skills, including Wayne’s. Jadakiss begins the song with rhymes, followed by Drake and Weezy. Jadakiss’s first verse contains lines such as: “I’m as real as they come/ I should follow the rules/ I still live in the hood/I should probably move,” making the song a club banger from the first second.

With fans dreaming of the two of the hottest rappers out right now, Wayne collaborated with Rick Ross on the track “John.”  The track is basically Ross and Wayne going back and forth, switching verses. It’s a pretty good song if you are really into the Rick Ross hype.

But the unexpected collaborationcomes on the track “So Special,”  featuring soul singer John Legend on the chorus It is my favorite part of the entire album. The song is supposedly Wayne’s version of a love song, but the love message was distorted by the many sexual references spread throughout the rest of the album that I failed to realize it until the chorus.

Overall, the album proves to be satisfying to all the Lil Wayne  fans who were waiting for a solid and explosive comeback from the previous album. With collaborations from hot rappers such as Drake and Rick Ross and unexpected tracks, Wayne reclaims his title of the hottest rapper out right now.