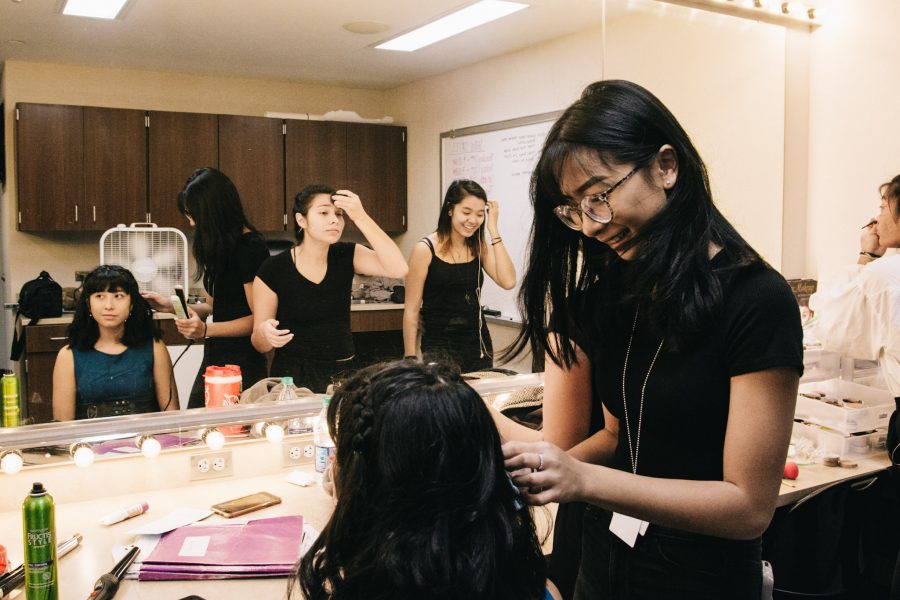 As stage manager of Cadre Kerr, senior Esmeralda Silva is used to the mechanics of the Black Box Theater. The light board, sound equipment, and workshop were all aspects she’s been familiar with for three years. Now entering her final year here, she is thrown into an unfamiliar environment. That environment is the new fine arts building.

For the theater department, they gained many new additions—one of them being their very own school stage. It was a feature that the school had lacked until construction finished earlier this school year. Generally Cadre Kerr performances were either held in the Black Box Theater or at the Taylor High School’s auditorium.

“So the stage [is] nothing like we have in the Black Box,” Silva said. “The Black Box is just a room painted black, but the new stage that we have is an actual stage with so many lighting equipment. I think our building is more advanced than Taylor’s. We have brand new sound equipment, brand new lighting equipment—it’s just everything is new.”

Along with the new stage, the theater program also acquired new rooms that the Black Box didn’t have before.

Although it’s a big benefit for Cadre Kerr to finally have their own performance space, Silva outlines some cons that came with the new fine arts building.“In the new theater we have a brand new workshop. We have our shop, it’s brand new with a lot of things,” Silva said. “We have a bigger sink in there. We have a white board that way in case they need to explain to you how to build things, it’s on there. We also have a brand new prop room, so this tiny prop room isn’t as crowded anymore. We have dressing rooms. We actually have dressing rooms. We have individual rooms for guys and girls backstage. Costume rooms. Brand new booth. Everything is new. Everything is more efficient. We’re not just crowded into a confined space.”

However, despite having to relearn the new mechanics, Silva finds that the new stage and equipment will be an advantage for incoming theater students, especially those who plan to pursue theater arts in the future.

With the benefits for theater, Silva is eager for the future of Cadre Kerr. Even though the theater program has been prospering before the addition of the fine arts building, the new stage and rooms will help Cadre Kerr become independent and greater than before.

“I would see theaters from Taylor [High School] and I’ve been to their stages and everything, but just saying this is our theater,” Silva said. “Mrs. Ryan and all the fine arts teachers were begging to have a new fine arts building and to know that all their hard work and all our hard work including showing that we’re a pretty good fine arts school. It just proves them wrong. Anything is possible even in the Black Box.”