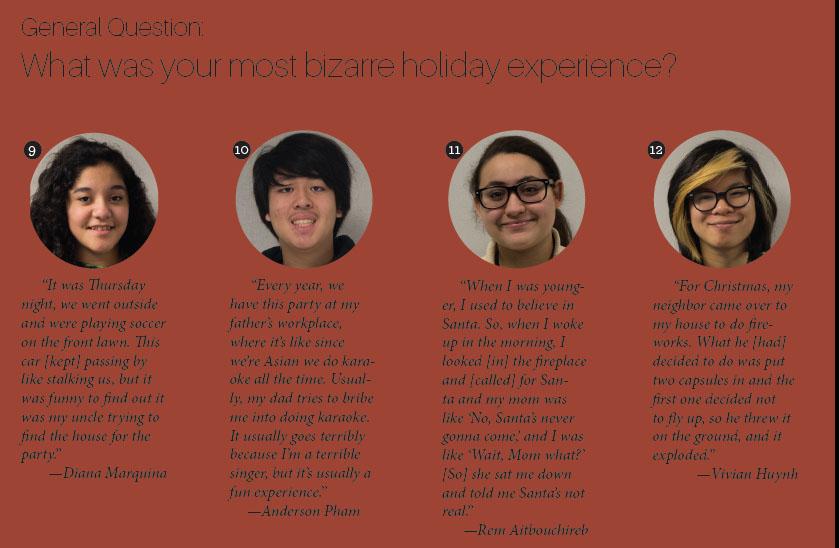 What was your most bizarre holiday experience?

The Christmas season brings family members and friends together each year guaranteeing a few pranks, surprises, and celebrations are to occur. What would the holiday season be without a few twists and turns? Students at Kerr are able to recount some embarrassing and hilarious events that happened during the break (and after) that will surely be memorable for years to come.

Freshmen Geneva Cortez’s Christmas break was more than she bargained for when she went on a trip with her family.

“Five years ago I was ten and I went to California for winter break and me, my dad, grandma, aunt and my cousin went to the mountains where all the snow is. So this one night everyone went out and I went outside with literally nothing on. I had a tank top, some shorts and I went outside just for like two seconds and my cousin locked the door behind me, so I was outside in the snow with literally underwear just freezing for an hour. It was horrible!”

Every child can recount eagerly staying up late at night in hopes of seeing Santa Claus come down the chimney with presents in hand on Christmas Eve. For senior Bennett Siwinski, Christmas Eve revealed something more interesting.

“I was either 7 or 8 when this happened but I was super pumped because it was Christmas Eve and I was gonna get all these presents hopefully the next day so I couldn’t sleep at all so I stayed up and I waited for Santa Claus to come ‘cause maybe I could get a glimpse of the old St. Nick and then the only glimpse I got was my mom putting presents in our stockings and under the tree and stuff and I was like, ‘Mom, where’s Santa? Why are you doing Santa’s job?’

And she was like, ‘Bennett, I’m gonna be real with you. Santa Claus doesn’t exist, and I was like, ‘Aww!’ and my childhood was ruined, but I had a great day ‘cause I got a lot of great stuff.” The Christmas break means holiday house parties, but senior Kelci Taylor learned not to ever have one again.

“So my mom went out of town during Christmas break, so I put a flyer on Instagram and Facebook that was basically like come to my house and turn up. Anyway I hired a DJ to come to my house and he only charged me $50 for seven hours! I hosted the party with a few of my close friends. So everyone just crashed and didn’t clean up and next thing you know my mom was pulling into the driveway. She saw everything and let’s just say my Christmas tree was empty that year.”

Christmas is a holiday synonymous with December but junior Thao Ngo know it can be celebrated any time of the year with just enough spirit.

“My aunt decided to send a Santa Claus impersonator with a huge cake and presents to my house in February on my birthday because she forgot to get me a gift on Christmas, so we ended up throwing a Christmas party in the middle of February and I got triple the amount of presents.”