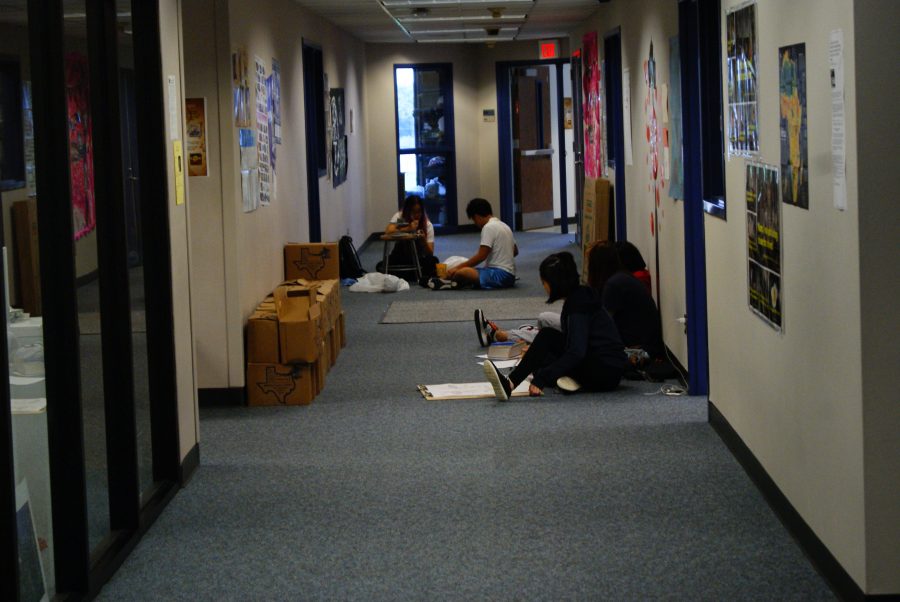 Art students work in the hallways due to insufficient space in the rooms.

Backpacks, pencils, and boards, lay across the Art hallway as students work on projects due the next day. Insufficient space in classrooms lead to multiple students using the empty space in nearby hallways to work. A cast of 70 students rehearses in one black box theatre with only 50 seats. Band and orchestra share rehearsal space and overflow into the hallways, resulting in distorted sounds from afar.

With these issues, Alief ISD plans to build a fine arts building, which will start construction by September 2016 and finish by August 2017. The new building will be built near the west side of Kerr, facing Beechnut street. The addition will also result in the reconstruction of the tennis court and the addition of new parking lots.

Junior Matthew Davis, a trumpeter, is excited about the new building.

“I am super stoked, man! This will be the fine art department’s chance to finally have room to expand and work.” Davis says. “It’s a bit hard to work with all of the music departments when it comes to practice space. But now, things will be spread out, allowing us to not worry about blasting others out with trumpets. An addition like this will totally highlight Kerr’s fine arts department, as it is practically the heart and soul of this school.”

The building is said to originally cost approximately $14 million out of the Alief bond budget, and consist of a 450-seat theatre, a green room, a dressing room, an orchestra room, a band room, a choir room, two art classrooms, and art display cases in foyer of theatre.

However, Fine Arts department chair Julie Ryan warns about maintaining such promises about the new center.

“The reality is that the bond went through for less money than what we ultimately needed for the proposals of the new fine arts rooms,” Ryan said. “We had to make a decision to get what everyone needs while still creating something beautiful. So the decision is that Art, such as sculpture and 3D art, will stay upstairs with Ms. [Janine] Hughes since the kiln is already there. Choir will move to the current band hall, and Ms. [Lisa] Canorro and digital media will move to the current choir room. ”

While the new building will have less space than originally planned, there are still many advantages from the fine arts expansion.

“This [building] gives everybody more space that they currently have and what they need,” explains Ryan. “while the builders will renovate the spaces to what they need. And so, band and orchestra will stay outside, along with theatre.”