Kolk honored as District Teacher of the Year 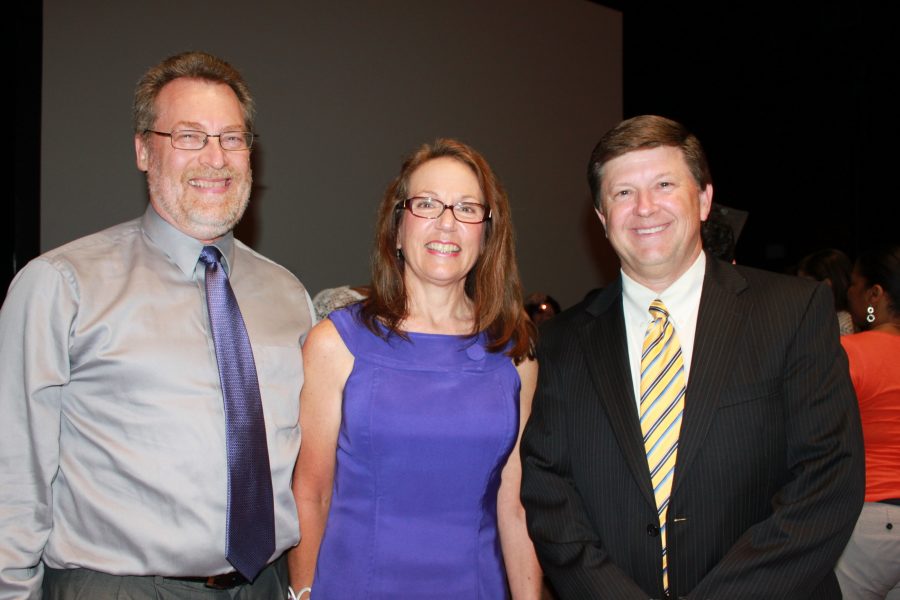 As she sat under the stage lights of the Taylor High School auditorium, many thoughts were racing through special education teacher Jan Kolk’s head. 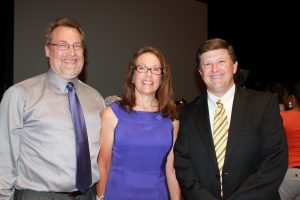 Jan Kolk poses with her husband, Kevin (left), and Alief ISD Superintendent H.D. Chambers (right) after the awards ceremony.First there was anticipation and nervousness: tonight, April 26, was a special night, for her and for Kerr. Kolk had been named as a finalist for Alief’s Secondary Teacher of the Year.  Tonight the winner would be announced.

“I kept thinking, whether I win or not, this is not a competition,” Kolk said later. “This is a recognition.”

She could see the section of seats  that librarian Jean Wu had reserved for Kerr students. It was full. She felt a surge of pride; it was an honor when the people she taught came out to support her.

In her head, she also went over points for an acceptance speech. She had only learned that morning from Wu that the winner had to speak.

“Ms. Wu said that it was our year,” Kolk said. “She had this gut feeling. She said, ‘You have to give a speech! Have you decided what you have to say yet? Well, you’d better get ready because you’re going to win.’”

Kolk’s path to the Taylor High auditorium started with the email that goes out to the Kerr faculty each year asking for Teacher of the Year nominees. The faculty submits names and then the school’s teacher of the year is democratically elected.

“I was so honored to be nominated,” Kolk said. “ We have exceptional teachers here, and it’s a validation when people think you do a good job.”

After Kolk won at the campus level, the next step was the district. Each nominee for the district title had to submit a two-page response and five letters of recommendation.

The applications were reviewed by one of two panels corresponding to the nominee’s school level, primary (elementary and intermediate schools) or secondary (middle and high schools). Each panel was chaired by Chuck Lang, Director of Leadership and Professional Development, and consisted of the Teacher of the Year for that level, a parent, a school board member and an administrator. The panel selected three finalists, each of whom they then interviewed.

“It was pretty intimidating,” Kolk said. “You’re in a tiny room with five other people. Mr. Lang asked all the questions. You do your response. The other people are taking notes but you don’t interact with them at all…I found myself getting kind of nervous. I was just hoping that I wouldn’t make a fool of myself. [I wanted to] present myself as someone who knew what they were doing.”

Kolk was also observed at work with her students.

“I don’t have a classroom. I was honored that the people who came to see understood that and were able to see the type of teaching that was nontraditional,” she said.

Kolk’s job requires a different skill set from the traditional high-school teacher or even the typical Kerr teacher.

“Being the special ed teacher, I go in and work with all the classes,” she said. “So I have to know info from math and science and social studies. My approach is to work on [building] relationships with students. I go in and talk with the kids, and I go in and know who they are.

“And if students don’t get something, that’s when I get to create a lesson right then and there. It’s a very different kind of teaching.”

All the improvised lessons, the games in advisory, the quiet help and the long afternoon tutoring sessions, had all brought Kolk here, to this evening on a bright-lit stage. Last year’s Secondary Teacher of the Year, Connie Koehn, strode to the podium and began to speak about her own experience as Teacher of the Year.

As Koehn wound down, she said, “It is my honor to introduce the secondary Teacher of the Year.” She paused. “She has been with the district for 30 years…”

The Kerr section was smaller than some others’, but it was full of teenagers. The studentscheered to equal any crowd when Koehn called out Kolk’s name.

“I felt overwhelmed,” Kolk said. “Because I truly did not think that I would be the person selected.”

Her elation was mirrored by those who had come to cheer her on. As soon as they could the Kerr students  rushed to congratulate her. “Oh, they were yelling and screaming,” Kolk said.

The enthusiasm carried over into the next several days.

“Everybody was just wonderful,” Kolk said. “They clapped for me in the hallway, they shook my hand, gave me hugs…It’s a reflection of what goes on here every day. The students have an effect on each other. They care about each other and the adults they interact with.”

From the district, Kolk will move on to the regional level. Finalists will be selected in July, and the results will be announced in August, with the winners moving on to state.

Kolk, however, is already happy.

“I don’t see myself as being the Teacher of the Year,” she said. “I want to represent all the exceptional teachers at Kerr that they chose to honor.”