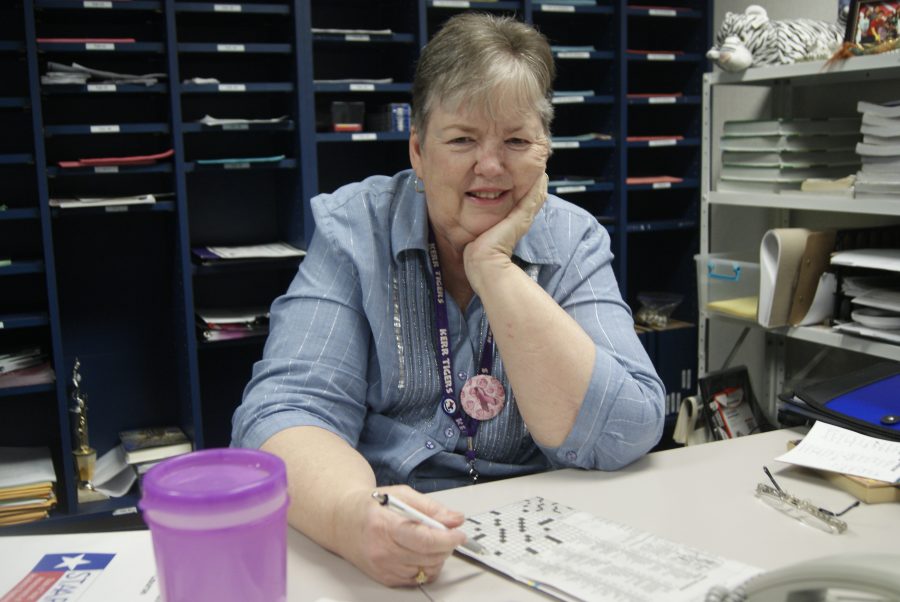 Michaele Halket looks back on her years at Kerr, which began with the first class in 1995.

Michaela Halket has been at Kerr since the beginning: back in 1996, she heard from her neighbor that a new school was being built and immediately enrolled her son in the charter class. From that point, she decided to volunteer at Kerr; later she got a job as a counter clerk and eventually ended in the Business Center.

Michaele Halket looks back on her years at Kerr, which began with the first class in 1995.“[Kerr] was small and accelerated so I put in a call to Patsy Hoover [the principal at Kerr at the time],” she said. “I started as the clerk in Spanish in ’96. I was on it from the beginning.”

After 16 years, Halket is now retiring. Throughout her time here, she’s made a lot of close-knit relationships with the staff and students.

“[I’m going to miss] the people, the staff, and the kids. I consider this my second home,” Halket said. “[Kerr] is a real close group of people; I’ve been a secretary for 30 years before I came here, but we never had that sort of camaraderie.”

Halket feels that she has learned a lot about the students during the years, and has come to appreciate everyone’s individuality.

“Everybody talks about how teenagers are the hardest for parents, but I’m around teenagers all day,” Halket said.”…teenagers are different and have different talents. Some students that I have to nag to get work done were in Orchestra playing beautifully. I appreciate each kid as a person.”

As she leaves, one thing Halket wants the students to remember is that she wanted what was best for them.

“I hope that they don’t think that my nagging is bad,” she said. “I hope they remember that I nag because I care, because I want them to succeed.”

Even though it’s difficult for her to leave, Halket looks forward to her retirement, as she will be able to focus on future projects.

“I will work on my genealogy, travel, read a lot, get up when I want to, [and] take lots of pictures,” she laughed.

Math teacher DIana Sanchez says she will remember the friendships formed.Even though she hasn’t been here quite as long as Halket,  math teacher Diana Sanchez feels that the atmosphere at Kerr is very positive and welcoming as well.

“The kids are more motivated [at Kerr], they make more effort to get good grades, and the faculty is great,” she said. “I will miss the interaction with my students…out of all the 36 years [of teaching], this has been the best.”

Sanchez has spent the last four years of her teaching career at Kerr and has also formed friendships with teachers and staff. Math teacher Sheri Koshkin will miss Sanchez.

“She’s always so easy to work with. She’s level and even-tempered…she seems so quiet but speaks up when she needs to,” Koshkin said. “We laugh a lot and we’re constantly saying, ‘What are we going to do when you’re not here?!'”

Sanchez feels that if she ever decided to teach again at a different school, she would definitely add the interaction she finds at Kerr into the curriculum.

“I would talk to kids more [at other schools], encourage them to study more and do research on my own to get closer to kids also,” she said. “Getting them to know each other more one on one and find out what they want to be.”

Kerr has changed her perspective on students, according to Sanchez.

“[Kerr has affected] the way I perceive kids; I’ve gotten to know parents and you see families because the brothers and sisters also go to Kerr,” she said.

Sanchez is a little  anxious about retiring, but she still looks forward to the change.

“My life is so structured; I go to first period, then second, and each lunch at 10: 30 a.m.,” she said. “I’m kind of nervous because once I retire, I can do whatever I want and it won’t be so structured—I’ll be more relaxed…I’m doing [my] hobbies; I plan on volunteering—that’s my main goal.”

According to Koshkin, the math center is looking for a replacement teacher and there may be changes ahead for the department’s organization.

“[The system] might change depending on who’s hired,” she said. “There will be another teacher; they’re in the process of interviewing other teachers.”

Sanchez hopes that her students will benefit from having younger teachers, but still remember her at the same time.

“I felt it was about time for me to relax…I want you kids to have younger teachers,” she said. “And I hope [my students] remember that I did a good job…that I care.”