A Project for Better Journalism chapter
The Kerronicle
Entertainment

Behind the scenes with Mo Amer 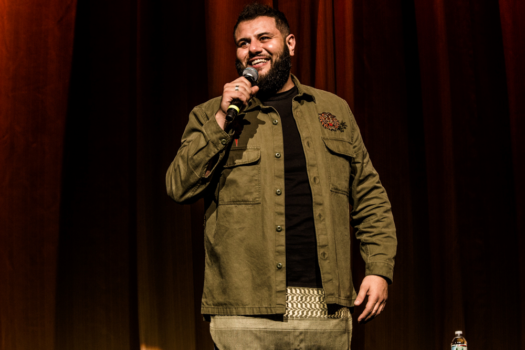 Mohammed “Mo” Amer attended Hastings High School and graduated early at the age of 17. He began his stand-up comedy career right from the get-go and eventually landed himself a comedy special on Netflix called “The Vagabond.”

Why did you want to be a stand-up comedian?

I fell in love with the art form. It was always something that just, you know, me coming from my Arab background, coming from a storytelling tradition as well. So it was just to see something that exist for an art form of the U.S. to elicit laughter and thought while telling stories and jokes. That was extremely appealing to me, definitely. First time I saw it I knew immediately that’s what just fits me. Ever since I was 10 years old.

If you weren’t a comedian, what would you be doing now?

I would have been a gardener or probably be involved in real estate development. I find it [interesting], you know, in particular like preserving neighborhoods. I’ve always had a passion for bringing something to life and I feel like certain neighborhoods before they’re condemned and gentrified, I would definitely be involved in the community in some way, in development and revitalizing communities.

Where do you get your joke material from?

My material mostly comes to me. It’s just my experience. If you watched my special, you can see it’s all about my own life experiences and trials of tribulation. I always found that the more personal your material is, the more it resonates with the people.

What’s the process you take in creating your routine?

It’s so, so hard, yet so easy, you know? For me, when I think of a topic and become obsessed, I can’t stop reading about it or watching stuff about it or informing myself about it. You just sit there and think and think. I go on stage and work them out, and then watch it mature. The more you go on stage, the more and more you work on it, then the better and better it gets.

What problems did you face when starting off your career?

There were so many issues. Just like how you’re starting in any company, you start from the ground floor up. It’s very, very difficult. You start off with your one-nighters and bars and making $25-100 a night. And then you graduate from other clubs. You know, being Mohammed from the south, it’s very difficult. It’s a long-term game. I had to wait 20 years for noticeable success.

Did you receive any support during the start of your career?

What was the deal you made with your high school teacher?

My father passed away at that time and I was skipping school. I was just not living the way I should be. So, my high school teacher— my ninth grade teacher, Mrs. Broderick, said that if I don’t skip school anymore, then she would let me do stand up in class. That was the deal. She asked me if I performed Shakespeare in front of class, then she would keep the same grade that I had from the first semester. I had to maintain that grade, so I never skipped after that. It was a deal that changed my life.

I haven’t been able to find her. I think a part of me is afraid maybe she passed away since it’ been so long.

How did you get your own special on Netflix?

20 years of grueling, painful, hard work. 20 years of clawing and working and believing in yourself. I worked extremely hard for a long time to get to that stage where I’m getting multiple offers from multiple networks, like Netflix deal.

What are some of your plans for the future?

Well I’m on a TV show on Hulu called “Ramy” so that’s going to be very exciting. It comes out April 19. To be a on regular TV show series is very, very exciting. It’s something I always wanted to check off my list.